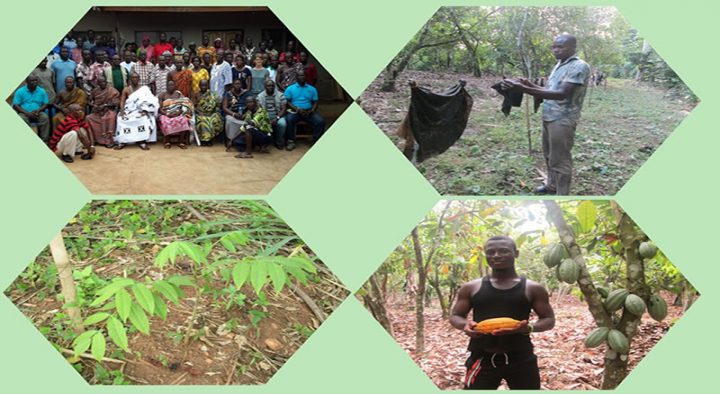 Fragmentation and loss of wildlife habitat has threatened the existence of many species in the high forest zones of West Africa over the last few decades. Mega-herbivores like forest elephants with a large home range and equally large food requirements have been among the most affected species with regards to this phenomenon. These keystone species in the high forest zone of West Africa are now found in small isolated forest fragments. There is a high risk of total extinction of most of these wildlife species unless pragmatic interventions are put in place to halt forest loss and degradation in the shortest possible time.

The Bia-Diambarakro Trans-frontier Elephant Corridor between south-western Ghana and south-eastern Cote d’Ivoire has been identified by government stakeholders and conservation partners as a priority conservation hotspot. The area requires immediate conservation action because it harbours high concentrations of endemic and threatened species of the Upper Guinea Forest Ecosystem and yet threatened from agricultural expansion, hunting pressure, over-harvesting of forest products and human-wildlife conflicts.

The three-year project was implemented primarily by the Forestry Commission in Ghana and SODEFOR in Cote d’Ivoire and coordinated by Conservation Alliance International with support from a number of partners in Ghana and Cote d’Ivoire. Over the last three years of project implementation in both countries, a number of achievements as well as key lessons learnt are worth noting. The project made significant progress in the achievement of both its conservation and development objectives.

Major achievement of the project includes the replanting of about 344 ha of degraded areas within the Bia-Diambarakro Transfrontier Conservation Area with over 130,000 native tree seedlings including Terminalia species, Triplochiton scleroxylon (Wawa), Ceiba pentandra (Ceiba), Khaya ivorensis (Mahogany) and Rinodendrom heudelotii (Akpi). The project again built the capacities of protected area management staff in both Ghana and Cote d’Ivoire in biodiversity monitoring and protection. Furthermore, the capacities of cocoa farmers were also built in the area of good agricultural practices including cocoa agroforestry and provided over 60,000 native tree seedlings which farmers planted in over 1,700 ha of their cocoa farms. It is delightful to note that over 300 farmers in Ghana had more than 5000 planted trees registered- the first successful pilot of the tree registration initiative of the Forestry Commission in Ghana.

Another commendable achievement of the project is the identification of the most likely elephant corridor between the two countries. This information generated by the project will be a valuable baseline information for future interventions that will seek to promote biodiversity conservation in the TFCA. Community Resource Management Areas within the TFCA also received significant capacity building through knowledge sharing events like a study tour that was organised for community forestry leaders in both Ghana and Cote d’Ivoire. A major lesson learnt throughout the project implementation process was the confirmation that indeed biodiversity conservation can only be achieved when it ties in with human development