Water logging and flooding are major factors impeding agricultural productivity in Northern Ghana. The situation is due to the erratic rainfall patterns resulting from climate change and the overflowing of the Black Volta due to the opening of the Bagre Dam in Burkina Faso. Flooding and water logging negatively affects agriculture productivity particularly for women and youth farmers, by limiting their ability to access arable farmlands, destroying planted crops, and facilitating prevalence of crop diseases. This results in farmers’ low yields which gets worsened by little-to-no farming activities during the dry season (AGRA, 2018).

According to the Statistical Research and Information Directorate (2014), most smallholder farmers in Northern Ghana produce a third of their actual potential. These low yields mean that, the affected farming households will have little to feed on throughout the year. This leads to severe food shortages and hunger from March to May of every year (known as the hunger period).  According to the World Food Program, the average malnutrition in Northern Ghana is 33%, and also 40% of women at reproductive age are anaemic. How can farmers reduce the impacts of climate change on their livelihoods and improve their harvests and earn more income?

In the light of this, Conservation Alliance (CA) in 2015 conducted a number of scoping activities in local communities to gather in-depth information on the dynamics of climate resilient technologies in Northern Ghana but found just a few (shallow wells, dugouts etc.) which possess a number of challenges to farmers. Further probing led to the identification of suitable technologies that would enhance the resilience of smallholder farmers in Northern Ghana and these included the Pave Irrigation Technology (PIT). The key interest was to implement a water conservation system which could capture water during the excess period, and also one that is not susceptible to high temperatures. This is because, efforts by communities to dig up shallow wells to store water, yielded limited success, partly attributed to the high evaporation rates of 9-12mm per day as against crop intake of water which is 3-4mm per day.

The Pave Irrigation Technology (Pave) has therefore, been piloted in eight communities in the Savelugu Nanton, Tolon and West Mamprusi Districts in Northern Ghana with funding from the United States Agency for International Development (USAID) under the Agriculture Technology Transfer (ATT) project. Subsequent funding, was secured from the French Solidarity Program (FSP) to build the capacities of beneficiary farmers in agronomic practices to ensure sustainability of the intervention. PAVE is an irrigation system that captures flood water, filters and injects underground into unsaturated soil layers. Promoting this technology was not an easy task because it was new to farmers in the area. 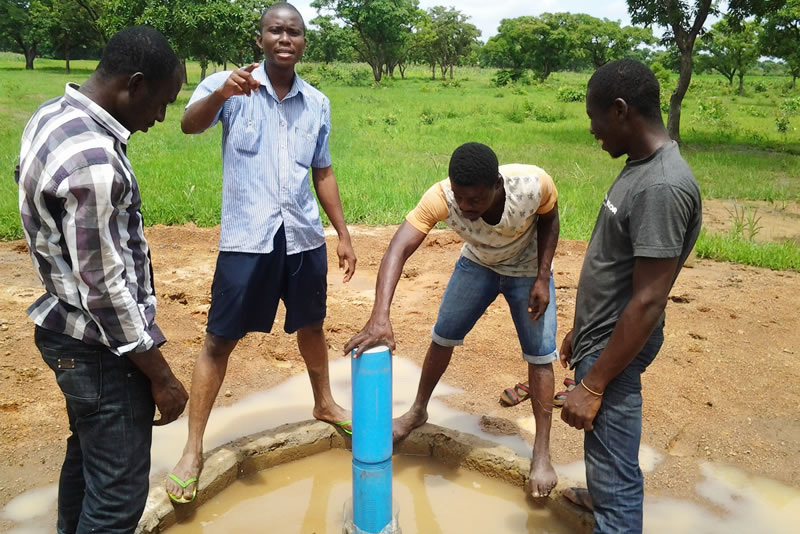 Local artisans and farmers in beneficiary communities were jointly involved in the entire installation process. After installation, further discussions were held with opinion leaders and farmers to select direct beneficiaries of the irrigation system. The beneficiary farmers offered plots of lands, of which the technical team used its site selection parameters to identify the most suitable land for the technology. From drilling to fixing of pipes and filling of the filtration system, local communities were consistently involved. The technology has captured water since installation in 2016. The water is being pumped out with the help of solar powered pumps for use in the dry season.

The involvement of farmers throughout the installation process of the Pave technology has positively changed farmers’ initial reluctance to adopt the new technology. Previously, there was scepticism about the technology’s ability to store water for farming. Further, most of the farmers had doubts about how drops of water from the drip kits could ensure plant growth. However, as the project progressed after very stage, the confidence and commitment of the farmers boosted significantly. Most farmers particularly women have adopted the use of the technology leading to a significant increase in crop production as against farms without Pave.

With this intervention, beneficiary communities have been able to cultivate vegetables including okro, chilli pepper, cucumbers and watermelons in the dry season leading to an all year round farming. A total of 500 households totalling about 4000 people benefited directly from the project. These households cultivate, sell and consume vegetables at home during the dry season. Additionally, some of the income generated from the vegetables sold, were used in purchasing other food crops to supplement their household food supplies. On the average, each household gained about $80-$100 in additional income during the dry season. Majority of farmers are excited about these outcomes as this would enable them provide for their families throughout the year.

Beyond making beneficiary communities’ food secured, the project sought to reduce the rate of migration in target communities by about 5%. Majority of the participant farmers often moved to Southern Ghana (Kumasi or Accra) to work in menial jobs. Alternatively, the project offered them an opportunity to stay during the dry season, hence increasing the availability of farm labour during the dry season. This has enhanced the local economy through the sustainable supply of vegetables to restaurants and hotels, thereby minimizing vegetable importation from other parts of Ghana.

Installation of the Pave Technology further helped the local economy as materials and labour are sourced within the villages, which also ensures post-installation services are handy. CA plans to construct additional 50 Pave irrigation systems to empower 1,000 women directly and about 10,000 others who are members of the women’s families to benefit indirectly.

The unique characteristics of the Pave technology presents opportunities to utilize Pave not only as a source of irrigation for dry season, but also as a supplementary irrigation which could be useful particularly  for cowpea farmers who often utilize residual moisture from floods. Scaling up requires strategic partnerships, and thus CA is open to partner with donors, investors, non-governmental organisations (NGOs), irrigation companies and relevant public agencies for the greater good of local communities in Northern Ghana.