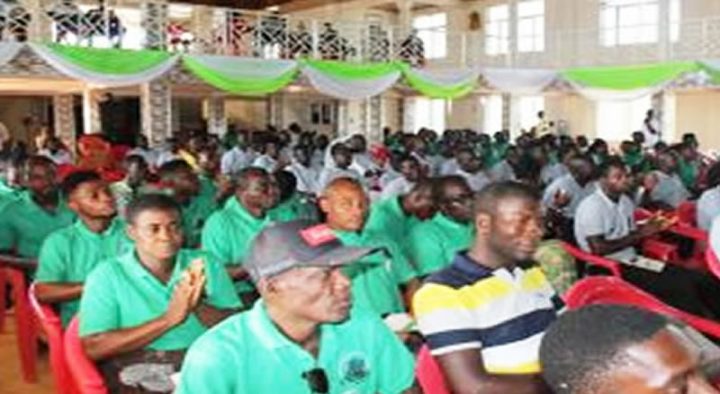 The inaugural event at Juaboso began with a procession by CREMA members led by a brass band to announce the program. The procession drew the attention of the people of Juaboso to the CREMA event and created some awareness on the initiative. There was great excitement among the CREMA leadership as they moved through the busy streets of Juaboso.

At the inaugural event, series of addresses received from State Institutions including MLNR, FC, WD, Aowin Municipal Assembly and Juaboso District. Nana Kwadjo Sikantia II, Acting President of the Aowin Traditional Council and Chief of Asemkrom was the Chairman for the Enchi inauguration while the Paramount Chief of the Sefwi Traditional Council, Katakyie Kwasi Bumagama was the Chairman of the Sefwi inauguration.

Addressing participants on behalf of the Executive Director of the Wildlife Division at the inaugurations, Dr. Andrew Kyei Agyare, the Director of Operations at WD in a statement acknowledged dignitaries present and extended the regards of the Executive Director of the Wildlife Division to all gathered. He further, briefed participants on events that preceded the inauguration and these included intensive awareness creation on the CREMA concept and its potential benefits, the setting up of the relevant governance structures including the CRMCs and CECs and their related capacity building activities. He also talked of the development of all CREMA constitutions which were followed by the local inaugurations of CRMCs within the five CREMAs.

In his inauguration and swearing in speech at Enchi, the Deputy Minister of Lands and Natural Resources, Mr. Benito Owusu Bio acknowledged the presence of all dignitaries and participants and talked about the challenges of natural resource management in the Enchi Forest District. This includes prevalent expansion of farms into surrounding forest reserves and other protected areas as well as illegal logging and mining. He added that based on these challenges the need for the CREMA creation in the area cannot be overemphasized. The CREMA is purposed to be a sustainable means of managing natural resources in off-reserve areas to support activities of the Forestry Commission which includes the periodic deployment of rapid response and patrol teams among others. The CREMA intervention is timely. He further, urged the CREMA leadership not to disregard the role of all other stakeholders to ensure success and stressed that the role of the Chiefs and other local authorities should be well tapped to help strengthen the effectiveness of the CREMA in the Area. After his enlightening speech, Miss Abigail Frimpong of Conservation Alliance, called to the platform, the CREMA Executive Committee (CEC) members of Aowin and Boin CREMAs. The Deputy Minister then handed the Constitutions and Devolution of Authority Certificates of the two CREMAs to the Deputy CEO of Forestry Commission, who also handed it over to the Municipal Chief Executive of Aowin and who finally handed them to the CECs

At Juaboso, the deputy CEO of the FC delivered a speech on behalf of the Deputy Minister of Lands and Natural Resources and the CEO of the Forestry Commission. In his speech, he recognized and appreciated the Chairman of the ceremony, as well as the Chief of Bonzain, and several other chiefs who were present. He expressed the gratitude of the Ministry and the Forestry Commission for the enthusiasm shown during this CREMA creation processes. He went on to restate the need for farmers to avoid expanding their farms into protected areas and also encouraged the CREMA leadership to engage all relevant stakeholders to help in the implementation of CREMA activities. After his speech, Miss Abigail Frimpong of Conservation Alliance called out to the front the Executives of the three CREMAs and the Deputy CEO of the Forestry Commission handed their Devolution of Power Certificate to the District Chief Executives of Bia and Juaboso who then handed them to the CEC Chairpersons of the three CREMAs. The Executives were then congratulated and their respective constitutions were handed to them.

In the closing remarks by Katakyie Kwasi Bumagama at Juaboso, he commended the initiative and all institutions who have made the program a success. He however, expressed his distaste for the happenings in recent times regarding the alarming rate of illegal logging in the Juaboso area. He stated that he will ensure the necessary sanctions are applied as custom demands and called on the CREMA Leadership, Chiefs and stakeholders to ensure that all illegalities are brought to the

The establishment of the five CREMAs is expected to support implementation of activities of the Forest Investment Program that is being implemented by the FC and COCOBOD in off reserve areas in the Western and Brong Ahafo Regions in Ghana. Municipal and District Assemblies were urged to support the development and passage of the bye laws in good time to strengthen the CREMA Executive Committees to function as effectively as desirable. “A management plan for each CREMA is to be developed to guide communities and other stakeholders in managing natural resources within the CREMAs”, Dr. Yaw Osei-Owusu added.