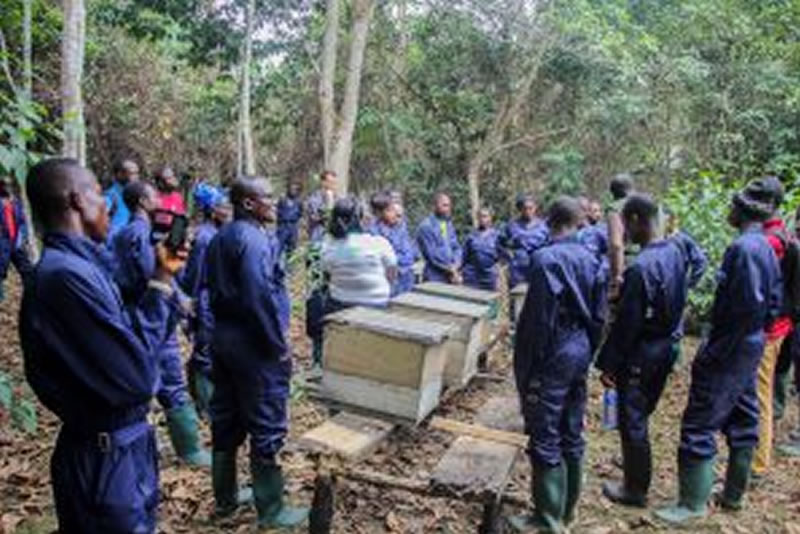 For farming communities situated around the edge of both Kakum and Bia Conservation Areas in the Central and Western regions of Ghana respectively, the problem of elephant crop raid appears to be a normal phenomenon. This has resulted from several causes including the expansion of farms into forested areas in a bid to increase productivity and household income. Additionally, farmers whose farms are close to the reserve boundaries are cultivating crops acceptable to the elephants. Some practitioners perceive that the elephant population within both Conservation Areas has gone up leading to the search for additional food sources from the agricultural landscapes.

According to Nana Kofi Adu-Nsiah, the Executive Director of the Wildlife Division, crops planted on the periphery of the park, particularly maize and cassava, attract elephants that stray outside the park boundaries. He added that, households lose more than 65% of food crops cultivated annually to elephant crop-raiding alone.
In reaction to the losses being suffered as a result of the excessive crop raiding, the fringe communities resorted to poaching, which is threatening the wildlife populations within the landscapes. In July 2017, Conservation Alliance International (CA) implemented a nine month project with technical support from the Wildlife Division (WD) of Ghana and funded by African Elephant Fund (AEF). The project aimed at building the capacities of farmers to apply innovative anti-crop-raiding techniques to protect their farms from crop raiding and thus enhance food security and household incomes.

Fringe communities have gained a better understanding of the contribution of elephants to ecosystem. A study conducted by Conservation International in 2008 revealed that almost 90% of fringe community members had a negative impression about elephants because of the threats they posed to food security and human life. The communities therefore perceived that the government considered the elephants of much value than human life.
Realizing this problem, there was the urgent need to increase awareness of the importance of biodiversity and particularly elephant conservation among communities and key stakeholders. Series of biodiversity education programs were organized to improve the knowledge, practices and belief of communities with particular reference to elephant conservation which is key to reducing human-elephant conflict. These engagements has rekindled a deep interest in conservation among communities and other stakeholders. A study conducted at the end of the project revealed that over 82% of community members accept that elephant conservation is important for enhancing the ecological health of the ecosystem and human wellbeing. This figure is likely to rise as more and more people participate in the project and benefit from the use of the deterrents. This should lead to better communication between Kakum and Bia National Forest park management and the surrounding communities, facilitating the resolution of possible conflicts of interest in the future.

In 2016, some farmers within both landscapes recorded almost zero crop yields due to elephant rampaging activities of the agricultural fields. Some cocoa farms recorded as little as a bag (65 kilos) per acre as a result of bean consumption by elephants, leading to low household incomes. As a first step towards improving crop yields, a training of trainer’s course was organized for cocoa farmers. The training was used to promote good agricultural practices such as pruning, integrated pest management whose adoption led to significant increase in farm productivity to discourage farm expansion into forested areas that will attract elephants. The adoption of these farming practices has led to about 40% increase in yields. In order to sustain the continued adoption of these practices, selected young farmers, about 30% women, were given further training to the status of Master trainers. The Master Trainers will continue to promote the adoption of these innovative deterrents.

The project team integrated that the traditional (less effective) with the innovative methods of mitigating elephant crop raiding activities. Demonstration sites established within the communities were hugely successful. The Community Relation Officer of the Wildlife Division, Mrs. Tina Anie, could not hide her joy, when she observed that farms with chilli-pepper grease fencing remained unraided compared to farms protected with deterrents. Traditional methods such as the use of carbide and masquerades were used by farmers to scare off elephants but that was not effective since the farms were still raided. The success of the demonstration motivated many farmers to sign on to the program. It is significant to note that, for once, more women farmers adopted these methods compared to their male counterparts. Almost 60% of the community members who took part in the exercise at Brahabebome community were women.

In recent times, beehives have also shown a high potential to ward off elephants from farms. Although this technique is not widely used within the landscapes, the project took the opportunity to introduce farmers to the beehive fencing as an effective elephant crop raid prevention technique. This presents an opportunity for communities to venture into beekeeping initiatives to increase income. Over 89% of farmers have adopted these simple deterrents which is a huge success because previously, driving elephants away from farms was only done by the Wildlife Division (WD).

A significant achievement of the project is community ownership. Beneficiary communities have formed scouts to patrol the park boundaries to check activities of elephants and warn farmers of any approaching elephants. The formation of the scout have been approved by the traditional authorities and opinion leaders, thereby giving legitimacy to the group.

To monitor and enforce laws within protected area management, effective monitoring systems have been establishment by WD, communities and CA. The system provides accurate information in terms on the status of wildlife populations in the protected areas and appropriate course of actions are taken to address them. Through trainings and knowledge sharing, over 40% of Wildlife staff have improved their knowledge on these systems and have applied best conservation approaches to improve management practices within both landscapes.

The project is considered successful with regard to the avoidance of crop-raiding: the techniques which were introduced had a 100% success rate, implying that none of the farms which were protected got raided. Together with the improved agricultural practices, this ensured more food security for farmers in the area. Besides that, community members felt empowered; farmers took up the responsibility of protecting their field instead of calling in the help from Wildlife officers in the area. Communities have organized themselves to trade in chilli and beekeeping with support from the Wildlife Division in both areas.