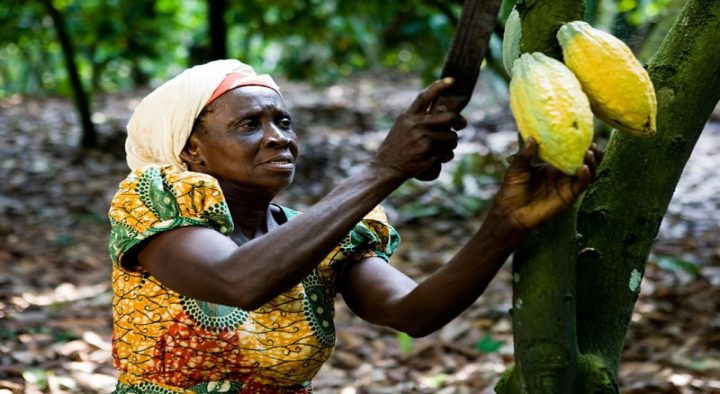 With a broad smile standing in a well pruned, spaced and clean cocoa farm, Esi Attaa, 40, who hails from Twifo Praso in the Central Region of Ghana, tells how her farm had been transformed over the past two years.

Aunte Esi says her yield has increased from one bag to five bags of cocoa per acre. She revealed that, previously her farm was not in the best of shape and it nearly collapsed, but the managerial support from the Boame scheme has made it very productive. Visibly, the cocoa tress has good leaves, looked healthy and had produced green cocoa pods. All parasite trees, which will compete with the cocoa trees for the limited nutrients had been cut down. Auntie Esi testifies that most women cocoa farmers often engage in other livelihood enterprises in addition to cocoa production which often resulted in division of labour, time and resources among the different economic activities.

“In an event that the woman cocoa farmer has limited time and resource to invest in any of the enterprises, the cocoa farm tends to be the least considered for investment,” she stated.The challenge Aunte Esi was facing was just one of the many issues in the sector. Although the country had gained the status as the second largest producer of cocoa, its main management challenge includes; high rate of aged farmers, high cost of labour and inadequate supply of inputs.

Dr. Yaw Osei-Owusu, the Executive Director of Conservation Alliance International (CA) says, these challenges translate into inadequate labour and financial investments needed for the optimization of the potential of cocoa farmlands. Cocoa production is a major economic activity undertaken by over 800,000 farmers. Improving farm management can help boost farm productivity and revenue of about $2 billion in foreign exchange annually, and is a major contributor to Government Revenue and Growth Domestic Production.

Boame, is an Akan word meaning “help me”. As the name signifies, the scheme seeks to help farmers to improve farm productivity, the ecological health of cocoa farms and household incomes. Since its inception in 2015, over 50 farming communities in the Central and Western Regions have benefitted from the pilot. Having proven effective and efficient at the pilot stage, the new phase of Boame is targeting over 60,000 cocoa farmers across the cocoa production landscape in Ghana. This initiative is being jointly implemented Conservation Alliance International CERATH Investments, Biodiversity Heritage Associates and Vital Info.

Dr. Osei-Owusu speaking in an interview with the Ghana News Agency explained that, the scheme provides farmers with two options thus; the full and partial management. The full management option is where farmers hand over their farm to the management scheme for assessment, mapping out and the required agroforestry practices are undertaken and farmers pay back cost of rehabilitation that is inputs and labour at an agreed period. The partial management option is where farmers sign unto the scheme to have their farms assessed to establish the management gaps, after which management prescriptions are determined and given to the farmer to implement. He added that, the scheme will complement government’s effort of improving cocoa production through the Cocoa Rehabilitation and Intensification Programme (CORIP).

Boame, he notes is targeting over 100,000 cocoa-growing households across Ghana and will soon be active in 15 districts in the Eastern, Western and Central regions. It is the desire of implementers to extend it to all the cocoa growing regions by 2020.

The Scheme Coordinator, Mr. Ato Kwamena Addo highlighted that, the Scheme has recruited and trained a set of local young men and women called BOAME Scout to implement these management practices such as pruning, wedding and spraying under the direct supervision of Conservation Alliance, thus creating jobs for the youth, a key policy of government. At the pilot stage 50 young men and women from their respective communities were gainfully employed and the number will increase by 45% as the scheme is up scaled.

Mr Anthony Carr, a Boame Scout from Twifo Praso in the Central Region of Ghana testifies that the services he’s providing has served as a source of income to provide for my family and support my children.

Experts say aside cocoa being one of the few crops that has a ready market, it is a good prospector for Ghana’s attainment of the new Sustainable Development Goal 15 which seeks to, among other things, help countries sustainably manage forests. In the case of Boame, the average tree cover of most of the poor managed farms in the piloted areas was two trees per acre and this has been improved to six to eight trees per acre through the scheme.

Professor Alfred Oteng Yeboah, Chair Of the National Biodiversity Committee states that the adoption of practices and activities that favour pollinators such as promotion of biological pest control and very limited use of pesticides have increased the abundance, diversity and health of these pollinators.“Pollinators play an essential role in helping to feed a rising local population in a sustainable way and help maintain biodiversity and a vibrant ecosystem, which is in line with sustainable development goal,” he said.

Just as the name implies, Dr. Osei-Owusu appeals to organizations and individuals interested in improving the wellbeing of cocoa farmers and the environment to help support the scheme.